I am what you may call an alien. My name is Alice. I will not be so daft to disclose my whereabouts. With you Earthlings one is rather safe than sorry. On my planet the air is fresh, there is no pollution – and we rather keep it this way, if you know what I mean. No offense meant really.

Well, I was sent to Planet Earth to find out whether there is room for some kind of friendship or cooperation or even knowledge transfer, but seeing the way you live I cannot but say that this has rather become unlikely. I have already lived on different inhabited planets and there were different, somewhat strange customs to be found. However, I haven’t found any species that is working towards its own extinction… I am not a trained psychologist alien or anything, just sharing my observations or rather open questions, which Santa and Anna from FindingSustainia are kind enough to publish. I am not saying that I am not a creature of their daft imagination – or maybe I am. Who cares anyways?

But hey, I do want to ask you some questions… I might learn a thing or two, or at least understand what it is to act so… well… somehow daft. It’s not that all is bad with you guys. But it is strange to see that you believe or at least act as if believing  that things you do do not have direct repercussions, consuming, eating, living as if there was no tomorrow. Well, maybe you do care –  or some of you do.

My name is Alice Alien – an no, I do not date Earthlings. Really – I don’t!

And since I heard that blogs are THE thing today, THE means through which people communicate and ask and answer questions, I’d like to ask a few questions. Ok, where do I start? With nothing less than questioning the proud nationals of THE UNITED STATES OF AMERICA, of course. Why not indeed?

cc: (not so) dear Donald Trump,

There are some things I just don’t get. And since communication is very often the key for understanding, I would love to ask you what the heck is going on with you and Trump. Obviously not everyone is with Trump. But still – it seems that he actually has a chance to become THE candidate for YOUR Republican Party. Of course, many of you are not supporters of the Republican Party in the first place, and maybe you don’t care… but do you at least understand what has brought this strange loud Earthling so far? Or would you be willing to help me understand?

I am not really a fan of conspiracy theories… but are we talking of reality here? Or is Trump a spoof, a comedian who is highlighting the socio-economic problems of the USA and the world by satire to point at underlying Islamophobic tendencies, fears of immigrants and maybe also satirising pompous stupidity itself? As long as he still continues being quite a potential candidate for the Republicans, I am waiting for someone to jump out of a box screaming: „April fool, April fool, you stupid silly silly world!“

Another -somewhat less likely- scenario is that Trump is a dhihadist with the sole purpose of provoking the US‘ and global Muslim population to that extent, that other Earthlings just can’t help but become terrorists. Could that be it?

Is my imagination running too wild – or is it as it is: and Trump is real? A Trump trampling on pretty much everything that could be sacred to humankind – and that just for the sake of being Trump, or: a prick to the extent of so standard prickhood that one would normally not even care to yawn, wasn’t it for Trump actually standing a chance to become president of your beloved country, the United States of America, a place where many different nationalities and religions and cultures live side by side… I just don’t get it. You guys are politically correct – right? You say „shoot“ when you want to say…well…“shit“, or „Goodness“ and „Gosh“ for „God“.

This is not to say that Europe is acting much better with their vulgar and not very enticing looking Madame Le Pen and the Hungarian Mister Victooooooor Orbán who violates Human Rights (I mean the legally internationally binding ones – is Hungary really in the EU?).

Or am I missing something crucial here? Please enlighten me, if you have an explanation.

Since I love tolls.  I really do. They are quite the thing, endearing! So please be a darling, Earthlings, and tell me #IAmNotATrump.

You wonder where I met Trump for the first time or why my confusion about him is increasing day by day? It started with this video of Ezra Klein: Donald Trump’s rise is a scary moment in American politics.

So, if you are with us, please share #IAmNotATrump. 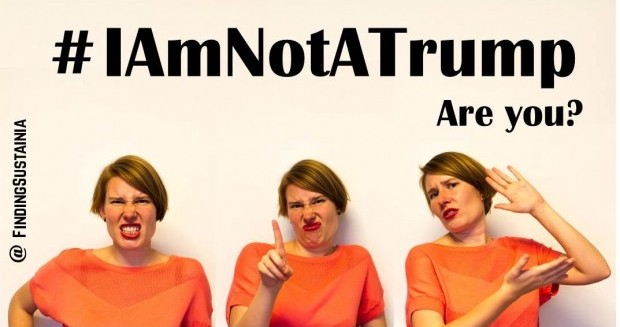