At the age of 10 when starting high school boys made these lists rating the beauty of us girls – back then as a lanky teenager I was voted ugliest girl. Already then I found these lists disgraceful and hated to feel like an object – it still subconsciously affected my body image and confidence. Because I gave ‚them‘ power over me.

I have also experienced the exact opposite that my perceived good looks created tensions in professional and personal relations and also „made me“ feel awkward and blocked. 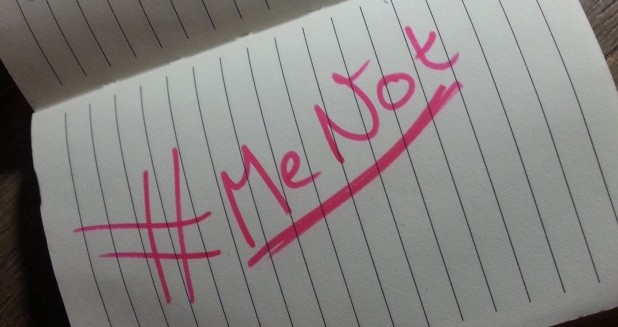 There were times I was dreaming of just being non-visible. Yet already then I sensed how important it is to not give away your power and that your dignity is crucial and untouchable.

Boys and men have harrassed and molested me too in different degrees – so yes #MeToo!

On different occasions I have felt judged on my outward appearance, both in a way that „made me“ feel insulted and humiliated and in other instances treated like an object or even dirty – so yes #MeToo

Men have catcalled me – so yes #MeToo

Certain men have made moves on me and clearly tried to ignore the boundaries that I set – so yes #MeToo.

But I refuse to be passive. We hold more power than we believe -that goes beyond physical strength.

As a child I experienced a man who started to be obsessed by my little sister and stalked her- I went up to him and calmly and firmly asked him what he is thinking at his age to approach my sister like this. He was the one walking out in shame. #MeNot

As a tenager a few boys in different situation grabbed my chest – and I, somewhat crudely, kicked them instantly there where I knew it would hurt them most. I walked out of it with a sense of having stood up for myself. What I however then experienced was far more interesting. These boys were not angry at me – whenever they saw me they felt ashamed of themselves, they even apologised and still remember now. – #MeNot

I am normally a pacifist- at least I aspire to be- so in my twenties I started another approach, more subtle and I would say powerful.

When in Turkey guys would start calling
their „rose“ or „heart“, I just called them back these names. And it was them blushing. #MeNot

A guy from my Master’s programme in London (who is even in my friends list) once while in a conversation without any apparent reason grabbed my behind. Instead of resorting to slapping him, I very calmly asked him why he has done it and that I am really wondering what on earth made him – a law graduate, clearly from a good family, with normally good manners- resort to such a hideous act. He didn’t know what to answer and felt shy and awkward. #MeNot

A guy from the army whom I had coffee with tried to pin me to the wall attempting to kiss me and trying to intimidate me by staring me down- I stared firmly back at his eyes and he backed off, blushing, turning his eyes away. #MeNot

A guy in East London called after me remarking primitively on my behind. I was angry that day and instead of ignoring it I impulsively turned around and asked him why he would say such a thing to me, what he expects from this and asking why he cannot just say: „Hello, you look nice – would you like to talk to me?“ He was completely taken by surprise, started blushing and apologised several times. He even promised to never do this again with another girl. #MeNot

Guys from different educational and social backgrounds resort to behaviour that feels – and is- disrespectful to us women. There are a lot of nuances in this – with child hood abuse and rape being one of its most terrible form and catcalling, sexist and inappropriate behaviour almost normal.
However I firmly believe that a lot can be changed by talking instead of accepting, from stepping away from the victim vs. villain concepts. Instead of keeping my anger and the sense of humiliation I experienced something quite profound and beautiful when talking and engaging: I felt sympathy for my supposed „villains“ and they started to truly see and perceive me. It has actually been an enriching win-win situation for both parties.

It is also in our hands as mothers, sisters, friends and fellow human beings to clearly communicate our feelings and boundaries.
Because boys don’t always have to be boys – they can grow into men who understand.